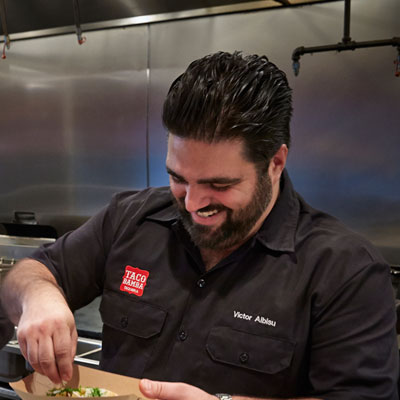 Chef Victor Albisu has more than a decade of experience in fine dining and upscale French, American and Latin American restaurants. He combines his culinary education with his Latin American heritage to bring a unique style of cuisine to his restaurant concepts Taco Bamba and Poca Madre.

In 2015, Albisu was named Chef of the Year by the Restaurant Association of Metropolitan Washington (RAMW). In 2016, he was selected as a semifinalist for the James Beard Foundation’s Best Chef: Mid-Atlantic award.

Albisu owns wildly popular taqueria, Taco Bamba, with multiple locations in Northern Virginia and one outpost in the Chinatown neighborhood of Washington, D.C. These taquerias reflect his Cuban and Peruvian roots, as well as his fresh take on Mexican fare.

Before pursing independent ventures, Albisu served as executive chef of BLT Steak in downtown D.C. While at the helm, Albisu cooked for President and Mrs. Obama and led the restaurant to earn several accolades, including RAMW’s Power Spot of the Year in 2012.

Outside the kitchen, Albisu is a member of the American Chef Corps, a network of chefs who serve as resources to the Department of State. In 2015, Albisu competed on Food Network’s Beat Bobby Flay and bested the host and grill master with his signature dish, steak & eggs. Albisu has appeared as a guest judge on Telemundo’s Top Chef Estrellas and the FOX TV series Hell’s Kitchen.

Albisu is a graduate of Le Cordon Bleu School in Paris. His professional culinary journey included Michelin three-star restaurant L’Arpege in Paris. Albisu is fluent in English, Spanish and French, and he holds a Bachelor of Arts in Politics and International Relations from George Mason University. He resides in Northern Virginia with his wife and sons.